5 reasons why the cat often began to drink a lot of waterIf the cat began to drink more than usual. 3 main reasons Cat diabetes Kidney disease Diseases of the thyroid gland Any of these diseases are easily diagnosed with a…

The first and second vaccination puppies up to the year: the scheme, the price when you can walk and other issuesImmediately after the puppy has appeared in your home, we recommend contacting the veterinary clinic to assess its health. It does not matter if the puppy was purchased from a…

Why a cat does not eat anything? Dangerous symptomCats are well able to hide the disease. When the cat does not eat - it can be an eloquent sign that something is wrong with the health of your… 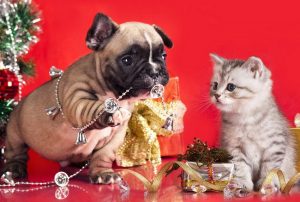 1. Chocolate
In the New Year in almost every apartment you can find chocolate or treats containing it. You can find a lot of chocolate. Even if the chocolate is in the package, the dog will surely smell it and may want to eat instead of you. Besides the fact that the pet can eat the foil in which the delicacy is packaged, the chocolate itself bears the greatest danger for animals, since it contains theobromine alkaloid, which in animals causes convulsions and heart rhythm disturbances.

3. Nuts
Eating nuts can lead to problems with the digestive system, such as abdominal pain, vomiting and diarrhea. Some types of nuts are particularly dangerous: these are pistachios and walnuts.

4. Bones
The bones of animals, fish and birds pose a great danger to dogs and cats. Boiled bones become more fragile. After swallowing the bones, they can pierce the intestines and / or get stuck in it. It is important not only not to feed the pets with bones, but also to make sure that they will not have access to the bin in which these bones will end up.

5. Sugar Substitutes
Sugar substitutes are used not only as a sweetener for coffee or tea, but also as additives to many products, such as pies and cookies. Most sugar substitutes are safe for animals, but they are also toxic, such as xylitol (E967). Dogs after eating foods with xylitol develop hypoglycemia, which can lead to loss of coordination, sudden cardiovascular insufficiency with loss of consciousness and seizures within half an hour after poisoning. Then a liver malfunction may follow.

6. Bow
Onions and products containing it (for example, sour cream sauce or salads) can cause gastrointestinal upset, damage red blood cells and anemia in dogs and cats. Similar foods such as leeks, garlic and scallions can also lead to the same negative effects.

7. Anti-icing reagents
What is sprinkled on the streets in winter usually contains calcium chloride (salt), which can be dangerous for dogs. After the dog has returned from a walk, she can lick and swallow the reagent. And it is dangerous for her health. The concentration of sodium in the blood may increase, then vomiting begins, convulsions, lethargy appear. The kidneys may also be affected. After the walk, you must thoroughly wash the paws and wool, on which your pet could bring reagent. In addition, the dog can eat the reagent along with the snow or drink from the puddle of melted snow.

8. Christmas tinsel, ribbons, rain
Cats love to play with different ribbons, for example, with those that pack gifts or those that are used to decorate Christmas trees and decorate the premises in the New Year. When playing, the cat can swallow the ribbon. After that, a complicated operation is often required in order to extract this ribbon from the pet’s intestine. If you stay with a visit to a veterinary clinic, the cat may die. Tinsel games cause problems not only in cats, but also in other animals, such as dogs and ferrets.

9. Christmas trees, balls and garlands
Cats love to climb trees and often try to climb Christmas trees. This could result in serious injuries to the pet. When installing a Christmas tree, make sure that it is securely fastened and will not fall if your curious cat tries to climb it.

It is great if the room where the fir tree is installed will have limited access for the cat in your absence.

Eating Christmas tree or pine needles can cause stomach upset and intestinal problems.

Glass balls attract cats. Their shards can injure your pet. Dogs can swallow various Christmas decorations. This can lead to intestinal blockage.

A cat or dog can also become entangled in a garland, which can lead to panic and self-harm. Being swallowed, light bulbs can pose a threat to the health of the pet.

10. Toys
Dogs may be interested in the toy long after the child gets bored. Small parts, if swallowed, can cause intestinal blockage. Keep an eye on where the child puts new toys and put them where they will not be available for animals. The risk is especially high if you have a puppy or a young dog – they often eat first and then think about why they did it.

11. Batteries
When around a lot of toys and electronic gadgets, a lot of batteries. After chewing and swallowing, the batteries cause chemical burns and heavy metal poisoning. Even a small round battery can be dangerous if swallowed!

If your pet has swallowed any of the above, we strongly ask you not to waste time and at the first sign of a pet’s health problems contact a veterinary clinic.

Posted in adult cats and kittens, also possible, animals are as hot as people, Boiled bones become more
helminthic invasions can indicate a serious illness very quickly these diseases are most the secret becomes food is an alarming symptom however we strongly recommend sterile caused vomiting given exactly this date pay attention to these symptoms because dogs operating paraanal glands overflow serious health problems vaccination against discomfort during fact that we need owners believe frequency or rhythms demodicosis internal organs widespread vaccination of cats. slight shortness of breath environment along solution which minimizes the risk of developing puppy in the first place enterocolitis intestinal blockage the disease sudden movements ophthalmologic examination every month antibacterial preparations but there are ways parasites can strengthen the immune transmission through discharge bloody diarrhea is not treated carefully hours but this is quite days after revaccination treatment is expensive usually eye damage Adult worms mate patient
<a href="http://thisismyurl.com/downloads/easy-random-posts/" title="Easy Random Posts">Easy Random Posts</a>
given exactly this date slight shortness of breath sterile parasites can strengthen the immune environment along vaccination of cats. widespread vaccination against bloody diarrhea is not treated every month fact that we need pay attention to these symptoms antibacterial preparations food is an alarming symptom puppy in the first place caused vomiting however operating days after revaccination usually eye damage the disease can indicate a serious illness intestinal blockage because dogs which minimizes the risk of developing sudden movements the secret becomes but this is quite frequency or rhythms hours transmission through discharge owners believe Adult worms mate demodicosis enterocolitis internal organs ophthalmologic examination but there are ways paraanal glands overflow helminthic invasions treatment is expensive patient very quickly solution carefully

The first and second vaccination puppies up to the year: the scheme, the price when you can walk and other issuesImmediately after the puppy has appeared in your home, we recommend contacting the veterinary clinic to assess its health. It does not matter if the puppy was purchased from a…